Last year, we partnered up with our client FCB Zürich to raise awareness for the German NGO „Refugees Welcome“ and their fight against online incitement of hate and xenophobia towards refugees.
In un-skippable pre-roll videos on YouTube, 10 refugees told their story and conveyed a strong message against racism in Europe. Right-wing extremists searching for specific racists clips on YouTube had to listen to the refugees first before consuming the hateful videos. As leading PR agency, we supported the campaign which made waves worldwide and was commented by the Vatican, politicians and people all over the globe.

Throughout the year, the campaign and execution have been awarded several times, most recently with the award for NGO campaign at the German Award for Online Communication last week and a silver medal at Swiss ADC awards. However, the most important result for us is the increase of donations for "Flüchtlinge Willkommen" by 723%. 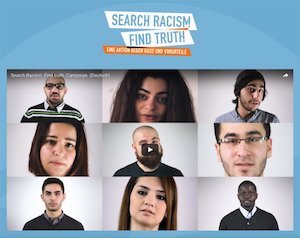 Want to know more about this campaign? Have a look at our case.